A gem in the heart of the Zillertal Arena 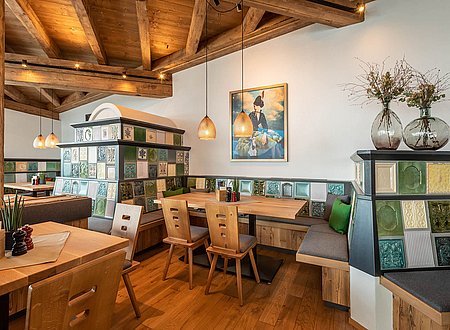 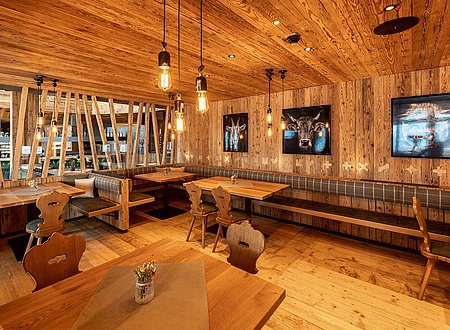 Anyone who sets foot in the Wiesenalm will be particularly captivated by the large airy space inside, which reveals the breathtaking panorama of the Zillertal mountains. The Wiesenbar is the heart and centre of the new Wiesenalm – as a curious guest you can see absolutely everything here: whether it’s the rustic Almstube furnished entirely in old wood, the “more chilled” Kaminstube with a fantastic view, the elegant Wiesenstube with the longest tiled stove or the Wiesenlounge, which is located on the upper floor. The spacious south-west facing sun terrace offers an equally magnificent view of the mountains and valley – for many “the most stunning view of Zillertal”.

The majority of visitors will not only enjoy the architecture and view, but will be hungry and thirsty. Our regional, seasonal and original cuisine and bar indulge all guests with traditional dishes and our in-house creations, such as the “Wiesenbier” or “Wiesenfleck”.

The various large and small dining rooms are ideal for parties and all kinds of celebrations. We are also happy to host seminars and workshops, in addition to weddings and birthdays. Let us in on your idea.

A monument to the Ramsberg lift

It’s the many small features that give the Wiesenalm its charm and sometimes tell romantic stories. For example, the disused chairs from the Ramsberg lift have experienced a great deal on their journey from Ramsau to the Sonnalm, before doing a totally new job at the Wiesenalm after more than 50 years: on the gallery on the first floor, the “Rondell chairlift” has been created as a place for those really cosy hours – gently rocking, enjoying the panorama, watching the colourful goings-on at the Wiesenalm.

Longest tiled stove as a "patchwork" of 370 vintage tiles

The probably longest tiled stove in the world was created in the Wiesenstube. Only at second glance can you guess the stories that lie behind the 18-metre long, warming eye-catcher: artistic ornaments, enchanting floral patterns, an unexpected interplay of shapes and colours create a real masterpiece in patchwork style. Every single one of the 370 tiles, dating from between 1895 and 1960, has warmed South Tyrolean farmhouses for decades. Some of the tiles originate from the famous Merano arcades and were expertly removed from there to be reunited in new form in the Wiesenalm. 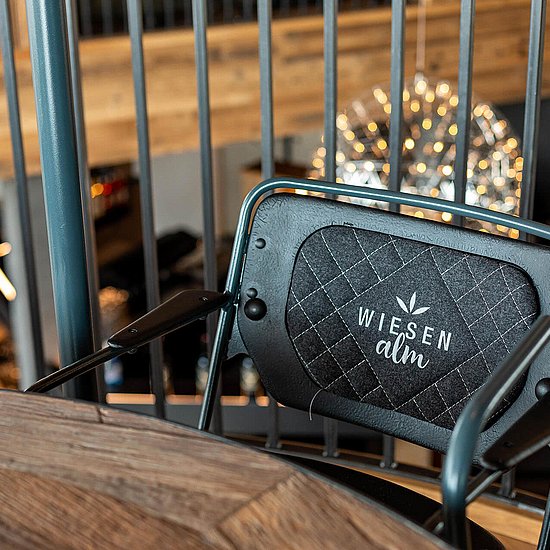 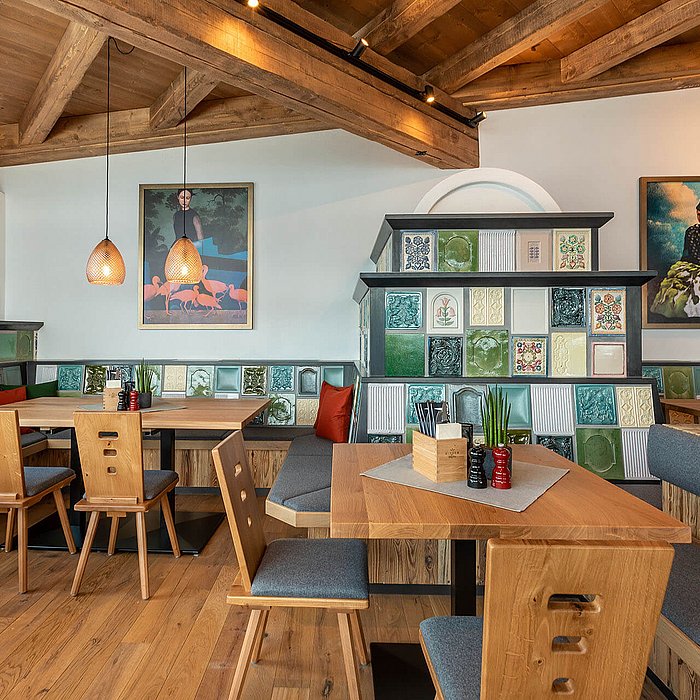 After 8 months of construction, no stone has been left unturned at the Wiesenalm. As the direct gateway to the Zillertal Arena on the Tyrolean side, a gem of cosiness has been created, bearing the unmistakable signature of brothers Elmar and Bertram Kranebitter (K-Stil). Wood, exposed roof timbers, natural building materials – these are the ingredients for the new Wiesenalm, which have created a place of well-being and harmony.

A strong focus was placed on sustainability during the construction of the Wiesenalm. In addition to a carbon-neutral pellet heating system, the waste heat from the nearby gondola lifts’ gears and the cooling cells is reused: in combination with a heat pump, the waste heat provides heating and hot water for the Wiesenalm. Furthermore, the entire power supply for the Wiesenalm comes from 100% renewable energy sources and the pure mountain spring water comes directly from the spring on site. 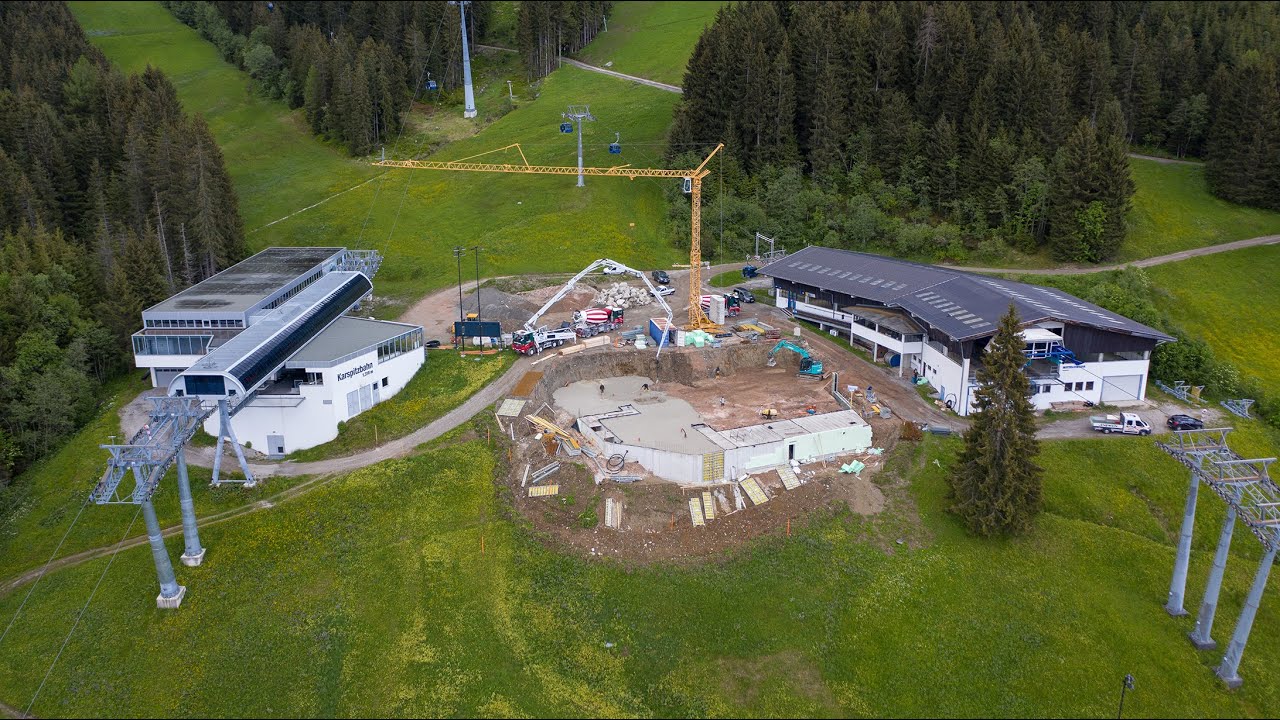 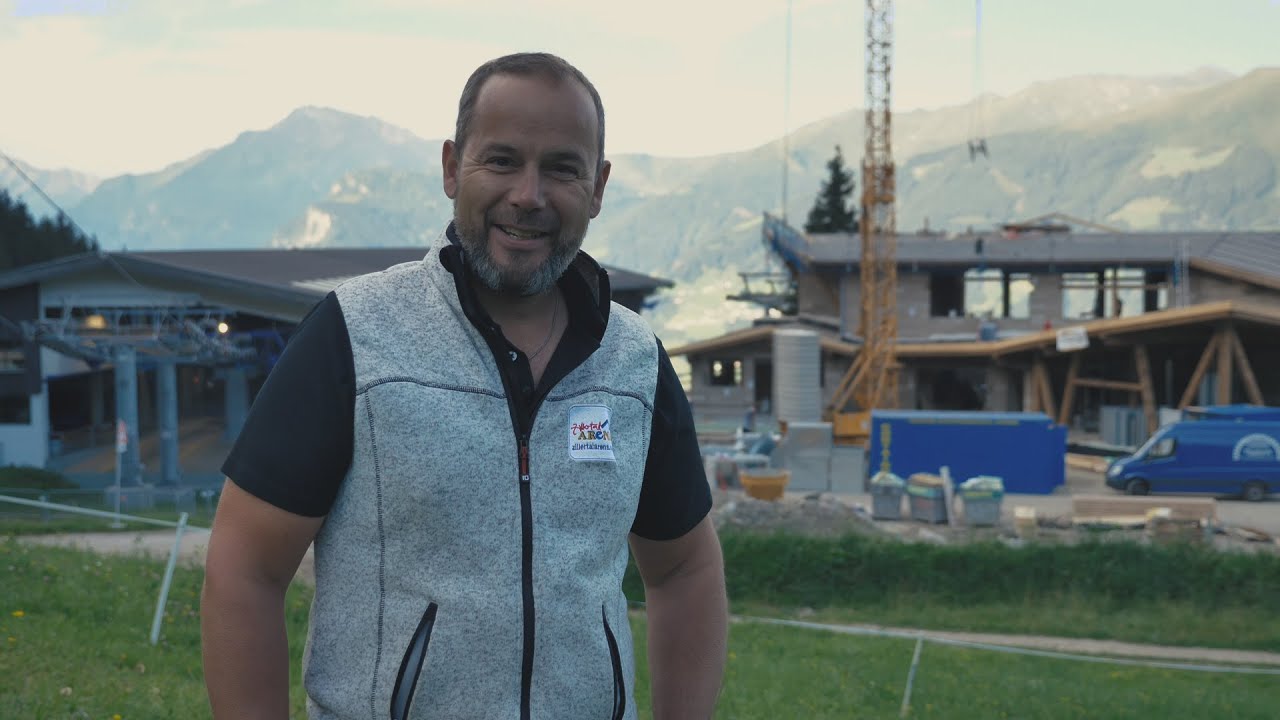 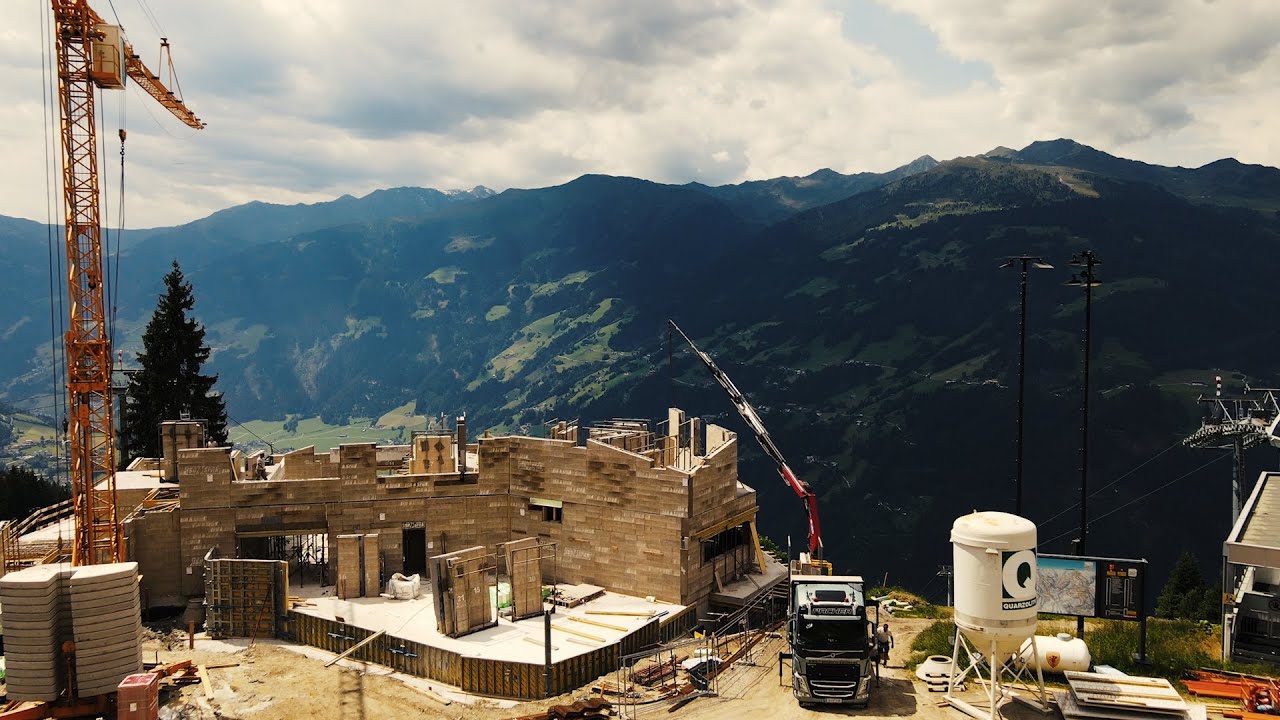 Episode 4: The longest tiled stove in the world 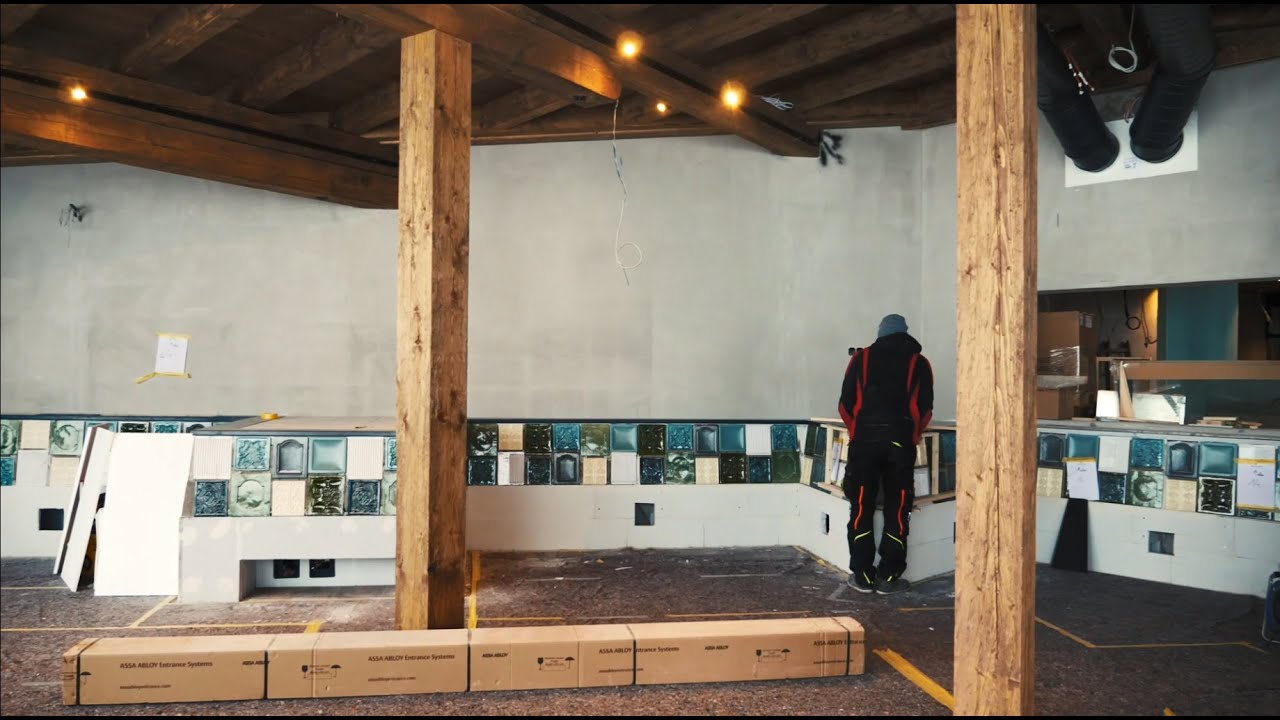 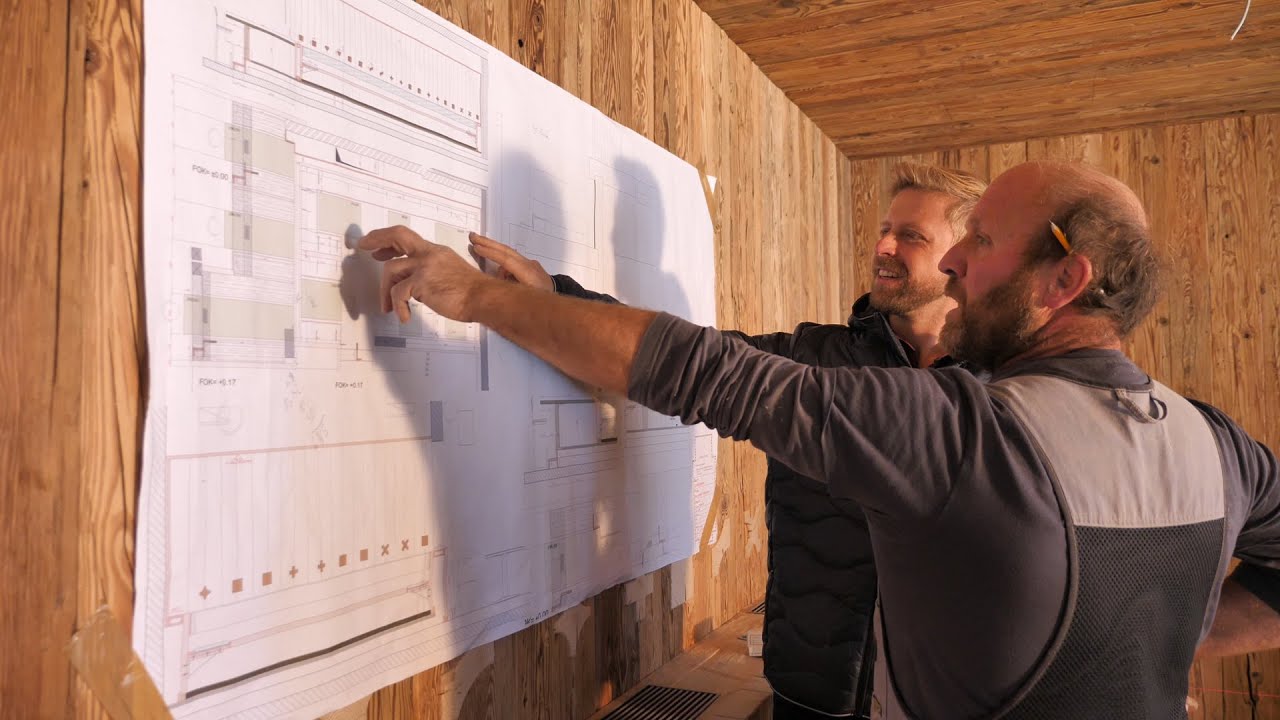